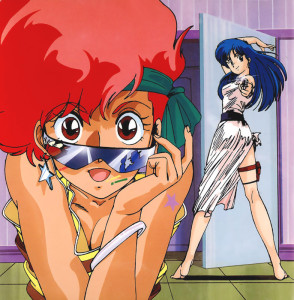 I have been watching anime a long time. Since about 1985 or so.

I can not understate this decision. This would be the first meeting of any group that I’d ever gone to of my own volition. And it wasn’t even meeting at the college I was attending, a state college, but the private rich-kid college across town. Still, they were welcoming us plebeian scum, so I showed up.

It was a mid-sized meeting room, I suppose, with a smattering of folding chairs set up in a couple of semi-circles, and a few tables around the perimeter, some empty and some with magazines from Japan about anime and manga. A lone TV set sat before the assemblage of chairs, awaiting the screening. As I recall, there weren’t enough chairs, so I sat on the edge of one of the tables in the back. It gave a better view of the TV anyway. There may have been some start-of-the-meeting announcements or something, but eventually a small brochure was distributed, and the main point of the meeting began, which was the showing of two episodes of a brand new (only six months old at that point!) anime. Dirty Pair.

Now all you young’uns need to remember something: this was late 1985. The TV was a 25-inch CRT. The show was on VHS video tape. A six or seven times removed copy of a copy on VHS tape. Resolution sucked. There was static on just about every single frame. I was across the damn room. There were no subtitles. The brochure (two or three pages of copy paper stapled together) had a few sentences that hinted vaguely on what might be happening in the episode.

My expectations were a tad low.

And then the episode started.

Even today, I remember the part of the opening sequence that grabbed me:

Shot through the screen, and Yuri’s to blame

It grabbed me, and it didn’t let go.

Of course without subtitles and a limited description of what the hell was supposed to be going on, I had little idea of what Kei and Yuri (the brochure told me that much, at least) were really doing. But I could tell that they were desperately trying to do something, and that none of it was really working. I could tell it was science fiction, I could tell the physical comedy at least was funny, and I could tell that those uniforms were fantastic.

I left the meeting determined to get my hands on more Dirty Pair.

And I pretty much didn’t.

Remember, this was 1985. I think fansubbing was getting started somewhere, but I had no way to plug into it. Unsubbed copies on crappy VHS were one thing, but subs were hard to come by. Some folks started selling subbed copies of series, and they weren’t cheap on a college student’s budget.

Eventually they were legally released on VHS, with subtitles, at least some parts of it were. And then lately the whole thing is out on DVD; I’m just the nostalgia customer they were shooting for, and I got them all of course. (yes, there is Dirty Pair Flash, but We Do Not Speak Of It)

But in the early years, either you had a connection, or endless funds, or you did without. And that’s what I did. Without.

It was hard to get anime back then. I got a laserdisc player, and bought a couple of laserdiscs of shows (Iczer One and A-ko, I think), but laserdiscs back then from Japan cost $130 U.S. each. That’s in late 80s dollars; today that would be about $250. Is there an anime you’d pay $250 for, today? And that’s not a whole series, mind you, but just one or two episodes! It was nuts. Totally nuts.

And that’s why I stopped. I couldn’t afford it. I couldn’t stay in a hobby that cost that much for high quality, and even low quality was hard to find, and all in a language I didn’t understand.

It was quite a while until anime called me back. Reeled me back in.

But that’s for another day.