The K-On! Music History’s Box is my latest feverish addition to my ever-growing K-On collection. It purports to contain pretty much all the music that was ever released from the TV show, movie, character CDs, and game (except the instrumental-only versions of songs that were included on previous releases, I believe). But I might be inaccurate on that, so check other sources for confirmation about that.

What I can give you, though, is pictures of what precisely you get for your 19,800 yen (list price). I always wanted to do an ‘unboxing’ type thing. I’ll skip the plain brown shipping box though; everyone knows what those look like.

Here it is, still in it’s protective outer plastic cover. (if I’ve loaded the pics into this blog correctly, you should be able to click on all the following pics for a much larger version of each pic). 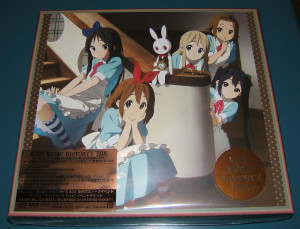 As you can see, it’s the K-On girls dressed to continue the Alice in Wonderland theme. I thought the stuffed “white rabbit” with the watch (since the white rabbit was always running late), next to the tortoise on the bannister, was a really nice touch.

The gold sticker on the lower left seems to be a brief overview of the contents, as well as a notice for a “K-On! History’s Talk” on 2013 APR 16. I think. I can’t read Japanese, so it could be a notice of that being when the world ends for all I know.

What is hard to tell from just a pic is the size; this box is a lot bigger than I thought it would be! It’s just shy of 12 inches (about 30 centimeters) square.

Here’s the box without the outer plastic sleeve. 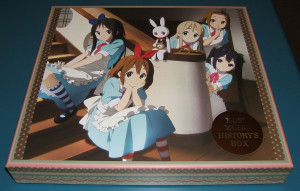 The round label on the bottom right is actually gold colored, but didn’t come out well in the picture. If you haven’t noticed my extraordinarily poor photography skills by now, plenty more evidence thereof is coming up, I assure you.

Here’s the inside (with the back of the top cover on the left).

That white card insert (which is not attached to the book underneath it, just so you know) I’d guess is a ticket to the History’s Talk event? With different dates/times listed? Beats me. I’m on the other side of the planet, so it matters not at all to me.

But note the inside of the top of the box, there on the left. Most items like this would be made with just a plain inside cover. But this is gussied up. I appreciate little touches like this, which transform a nice item that you wonder if you paid too much for it, into a really great item that you’re glad you got while the getting was good.

Close up of the cover of the first book included in the box: the Cover Art History Book. 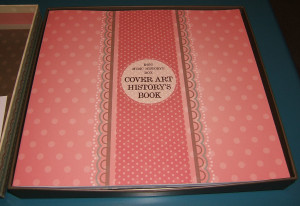 Here’s a few (very few) pics of randomly selected pages from inside the book: 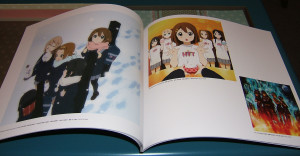 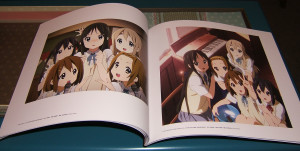 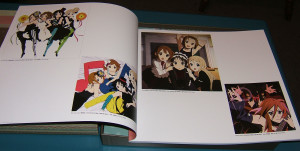 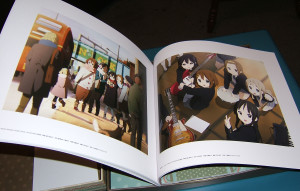 As you can tell most in that last pic, the book is bound rather than just stapled. This is a disadvantage to those trying to take a picture of it and it won’t lay flat so you have to hold it open with one hand and take a (bad) picture with the other, but for everyone else it’s a higher quality book that way. Ah, the minor indignities I suffer for you, the Mythical Reader.

But the book contains (all?) the cover art for the previously released CDs of all the K-On music. Which appears from the book to be one heck of a lot more than I was aware of.

Here’s the cover of the second book included, the Special Book. 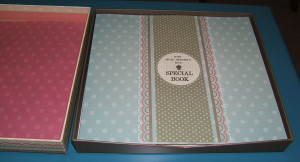 This book has the listing of all the songs on all the included CDs: 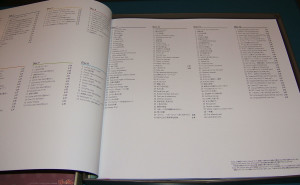 as well as lyrics:

Well, for those tracks that have lyrics, I guess. (Selections from the soundtrack discs don’t tend to have lyrics.) Rather than try to give you a summary of the listings, just go to a great track listing at the KEION!GEEK blog.

At last, the cover of the box with the actual CDs in it: 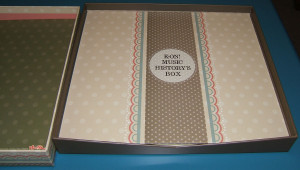 Let’s get to the CD goodness already!

We open the first panel…

Note the teapot and teacup on the interleave. I swear it’s the little touches like that are so fantastic.

Anyway, open the other panel…

(we pause here while the mad writer frantically checks for damage)

Whew! No damage. Not even a scratch as far as I can tell. But let’s get these where they belong…

Much better. Now then, as you can see, the discs continue the watch theme from the white rabbit on the cover, with each disc numbered with the hands on the clock corresponding to the hour of which that disc is. No, that sentence made sense, damn it! The first disc is 1 o’clock, the second is 2 o’clock, etc. Although each is also labeled with a simple disc number at the bottom in case you don’t feel like figuring out the clock face.

Oh, and yes, they got some of the Roman numerals wrong. They put six as “IV” when it should be “VI”, and similarly on through seven, eight, and nine. A minor thing. I sure wouldn’t get Japanese numbers correct, so I’m in no position to judge.

Last pic, of the back of the CD box (on the left) and the inside of the bottom of the outer container (on the right):

More gorgeous detail. The rabbit and tortoise theme repeats. The time on the watch is 4:31. Traditional English tea time was between 4 PM and 5 PM. Don’t most Japanese school classes end around 3 PM or so? Hence 4:31 is, roughly, afterschool tea time. Yet another subtle in-joke. Whoever did this deserves a pay raise. Seriously.

12 CDs. 258 tracks. More versions of “Let’s Go!” than a sane man knows what to do with. Packaging that defines the words “beautiful” and “gorgeous”.

Very expensive. Very much worth it. I highly recommend it.

Oh, and there’s one other thing I received… heh heh. Pictures later, after I get it framed.